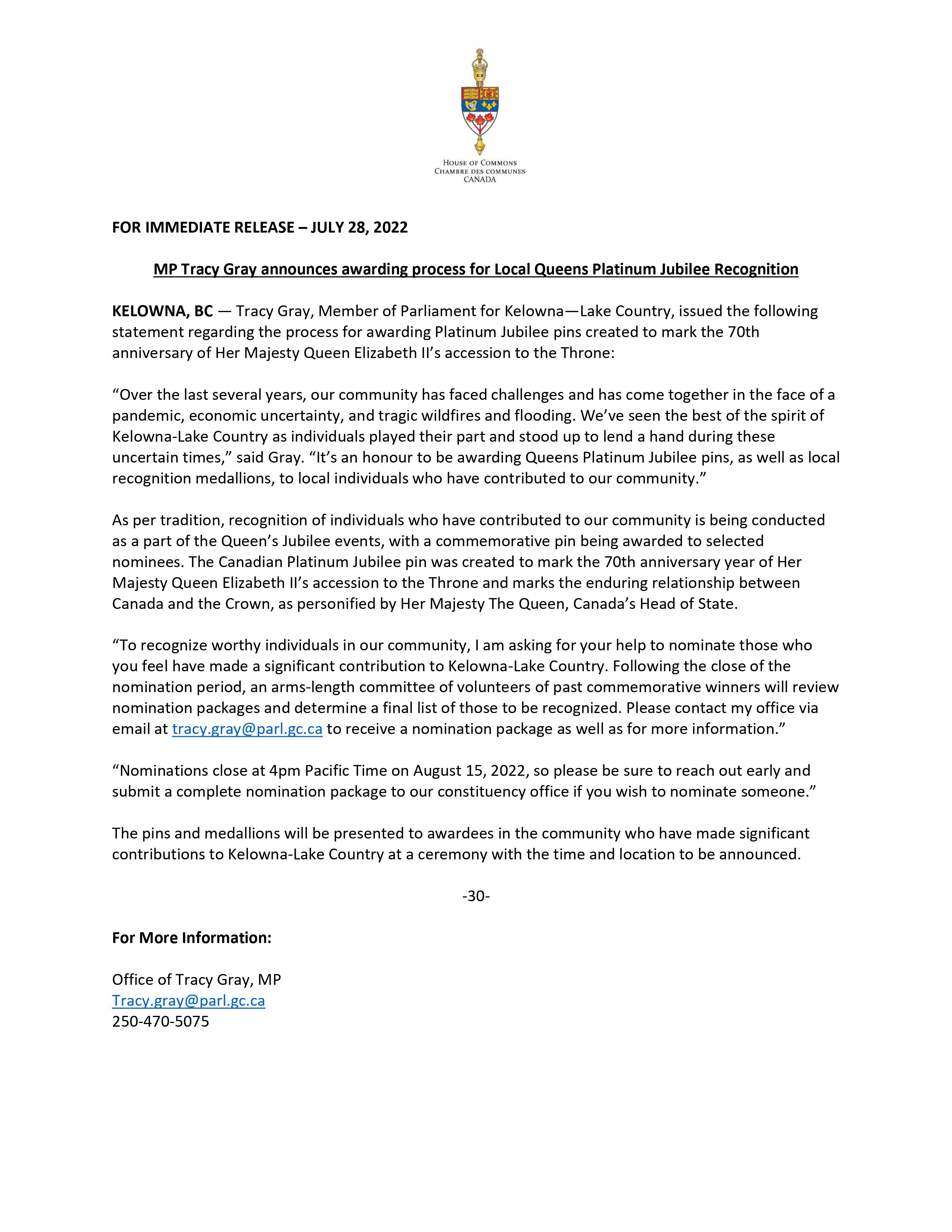 KELOWNA, BC — Tracy Gray, Member of Parliament for Kelowna—Lake Country, issued the following statement regarding the process for awarding Platinum Jubilee pins created to mark the 70th anniversary of Her Majesty Queen Elizabeth II’s accession to the Throne:

“Over the last several years, our community has faced challenges and has come together in the face of a pandemic, economic uncertainty, and tragic wildfires and flooding. We’ve seen the best of the spirit of Kelowna-Lake Country as individuals played their part and stood up to lend a hand during these uncertain times,” said Gray. “It’s an honour to be awarding Queens Platinum Jubilee pins, as well as local recognition medallions, to local individuals who have contributed to our community.”

As per tradition, recognition of individuals who have contributed to our community is being conducted as a part of the Queen’s Jubilee events, with a commemorative pin being awarded to selected nominees. The Canadian Platinum Jubilee pin was created to mark the 70th anniversary year of Her Majesty Queen Elizabeth II’s accession to the Throne and marks the enduring relationship between Canada and the Crown, as personified by Her Majesty The Queen, Canada’s Head of State.

“To recognize worthy individuals in our community, I am asking for your help to nominate those who you feel have made a significant contribution to Kelowna-Lake Country. Following the close of the nomination period, an arms-length committee of volunteers of past commemorative winners will review nomination packages and determine a final list of those to be recognized. Please contact my office via email at tracy.gray@parl.gc.ca to receive a nomination package as well as for more information.”

“Nominations close at 4pm Pacific Time on August 15, 2022, so please be sure to reach out early and submit a complete nomination package to our constituency office if you wish to nominate someone.”

The pins and medallions will be presented to awardees in the community who have made significant contributions to Kelowna-Lake Country at a ceremony with the time and location to be announced.